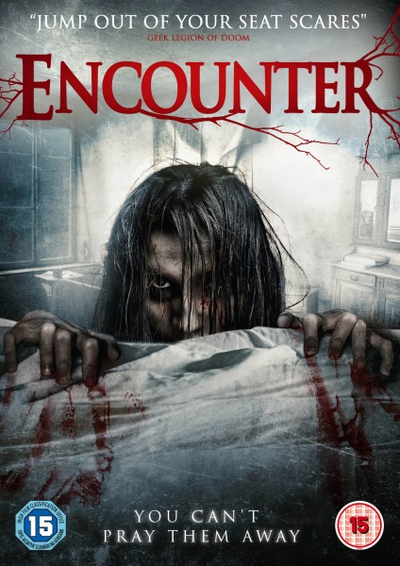 It’s Friday, and that means Brad’s here with another review! This time, he’s sat down with Encounter (2015) Dir. Susannah O’Brien. Here’s the lowdown…

Encounter centers around an exceptionally bland and annoying newlywed couple, who move to a remote country house to film their thesis study on the phenomena known as “orbs”. It’s a McGuffin, but it’s at least a thematically suitable one, so let’s not hold that against it too badly.  They set up a butt load of security cameras all over the joint, and settle back to watch what happens.

As the days and nights pass they witness strange and unsettling events, a lot of which seem to involve their creepy landlord, Jim, who bears more than a passing resemblance to a homeless Tom Araya from Slayer. As the disturbances continue, they soon discover that the house harbors a dark and terrible supernatural secret that threatens their sanity and their very lives.  Because that’s what happens in these sort of movies, right?

I liked a lot of things that Encounter had to offer, and chief amongst these things was the sound design, which I simply loved.  Creepy, subtle…sometimes not to subtle…it was a real strong point to the movie, and added an awful lot to the atmosphere.  That’s not to say that Encounter is lacking in atmosphere.  The tension is handled incredible well, and I felt myself getting physically tense during some of the “fixed camera” surveillance footage scenes; and of course, there’s more than a few good old fashioned jump-scares along the way.

My only real criticism lays with the two main characters, Ted and Lauren.  It’s just really hard to get involved with them.  They’re wooden and little stupid, even so for horror b-movie characters.  I don’t think it was their acting that was bad, so much as the direction and script hampered the performances – perhaps because this is one of those movies, where the producer, writer and director is all the same person, which is very rarely a good thing.  Not naming any names.  Edward D. Wood Jr.

Ultimately, Encounter is an unconventional haunted house story, and a pretty good one; mostly because I’m a sucker for a genre bending twist.  I love those.  Encounter is certainly worth checking out for ghost/haunted house enthusiasts.