Joe’s partial to a webcomic or two, and, after a tip off from r/comicbooks, stumbled upon the glorious “Kill Six Billion Demons”. Which has just been picked up by Image for publication! “Kill Six Billion Demons” is a one creator – enigmatically known as Abbadon – run webcomic, focusing on a teenager trying to get her end away and suddenly being imbued by some holy power – in the form of a key made of white light that proceeds to get jammed into her forehead – when a portal to hell opens behind her as she’s getting hot and heavy with a random guy. After this she finds herself in hell/heaven, and has to contend with this strange new world and its stranger inhabitants, and possibly find a way home. It’s part Hellboy, part Avatar: The Last Airbender (particularly in its influences from eastern spiritualism and aesthetics) and part something entirely of its own.

“Kill Six Billion Demons” is a rarity, for me at least, in that it appears to be *so* developed that it’s a wonder a comic of this abundant quality could be pulled off by one person. The sheer scale of this project is commendable in itself, which often supplies us with large and expressive “where’s Wally/Waldo” style double spread pages – think the Troll Market in Hellboy 2 or Mos Eisely Cantina for reference – containing meticulous detail and showcasing the creators sheer imagination and world-building sensibilities. Of course, I am also reminded of another great, and equally as off the wall series as this, and that’s Neil Gaiman’s “Sandman”; Kill Six Billion Demons feels very much cut from the same cloth, and it’s wonderful. And it doesn’t end there, for accompanying the traditional pictures and word bubbles is the occasional bit of religious text – much like what prefaces most chapters of Frank Herbert’s “Dune” – which goes to further the universe with little dashes of offhand information that gives the appearance that it is relevant to the plot, as well as rounding out events that have or will happen. And how great it is then, that this text matches the quality seen in the art, making “Kill Six Billion Demons” a compelling package for anyone who wants a little more from their comics, for you can enjoy the story without reading these extras, but for me at least, they quickly became required reading. 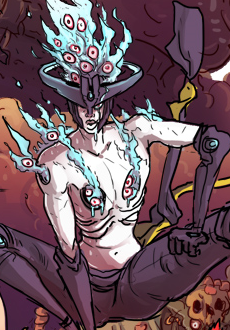 I must congratulate Abbadon for their artistic sensibilities. There’s a lot going on in KSBD, but the art never fails in delivering clear renditions of this beautiful and broken world called Throne; Characters are compelling, in particular the protagonists protector, an Angel that is adamant that they aren’t female, and who serves as our guide in this weird world. This is a project that just gives and gives, and never fails to up the ante, and I can only glean the creators own immense enjoyment in creating this series, something that should serve to be inspiring to other would be comic creators.

To date, I’ve read the first two issues, and the accompanying prose “Prim leaves her Father’s house” and I’m absolutely looking forward to reading more and picking up the paperback when it drops.

As such, I thoroughly recommend this series, firstly to anyone who is already interested after reading this, and secondly to anyone who enjoys massive efforts in world-building, sumptuous artwork and a refreshing take on Heaven and Hell, and all of its denizens. Though there are wisps of other franchises here, Kill Six Billion Demons ventures forth into its own domain. So find it, read it, for I can assure you, you haven’t seen anything quite like this.