Long time Trek enthusiast/Worst Trekkie in the universe, Joe, recently caught “Star Trek Beyond” (2016) in Blackpool whilst visiting “Star Trek: The Exhibition”. Here’s what he thought about it – Warning, enthusiasm is abound here.

Star Trek Beyond, the third entry in the “Abramsverse” sect of Star Trek movies, but the first not to be directed by J.J himself, the task going to Justin Lin – of Fast and Furious fame – finding the crew of the Enterprise halfway through their 5 year mission, Kirk appears to be climbing the walls, tired of the routine and in his own words “episodic” nature of day to day life – nice work there on the pun by the way – and is considering applying to become an admiral (meaning no more ship, or crew) Things with Spock and Uhura are on the rocks, after Spock receives some bad news that causes him to question his place at Starfleet; in general though, characters are all questioning their purpose when faced with the seemingly infinite expanse of space, a question that packs Star Trek Beyond with an incredible amount of heart, so much so that you’d be forgiven for confusing Beyond for an entry in the older series of films. Paired with this is the story of “Krall”, played by Idris Elba, and the actions he takes against Starfleet – fronted here by “Yorktown” a deep space Starfleet construct which serves as a home and base to Starfleet representatives – in order to retrieve an artifact with the help of his insect-like fleet of ships.

The successes of Lin’s Star Trek hinge on the tightness of pacing, as Beyond hits the ground running, relentless as the set piece to set piece nature of this film is, there’s still time allowed for characters to play off one another in true Star Trek fashion, with some excellent moments shared between Spock and Bones in particular, as their dour bitchiness towards each other provides great moments of levity, whilst also serving a picture perfect slice of the best that Star Trek has to offer, moments of real worth between two peoples of different cultures, working together to a greater cause. Kirk’s internal strife comes from him becoming older than his father was at his death (Star Trek, 2009) is compelling, as is seeing him come into his role of Captain far more than we’ve previously seen, He is tired and weary, but wise with experience. Scotty shines here, and I do wonder if that’s because of Simon Pegg’s presence in the writers seat, but then, it really works, and the interplay between ‘Montgomery Scotty’ and Jaylah – a hermit that is a joy to watch on screen – provides yet more moments of warmth between peoples of two cultures. Speaking of Jaylah herself, her presence here is a much needed addition and serves to broaden the roster, differentiating the Abramsverse enough so that we are not just served up sights we’ve seen before in different variations a la Star Trek Into Darkness. 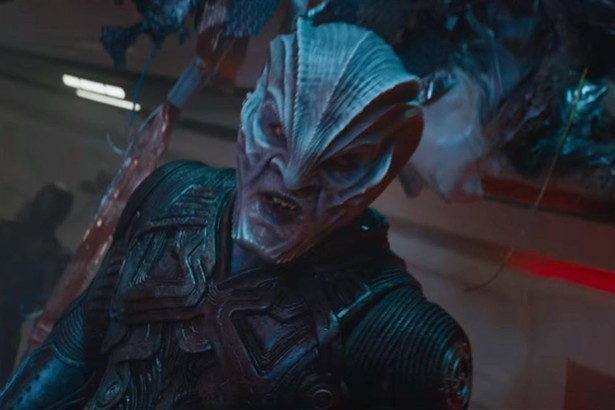 Elba’s Krall is perhaps a little under-served here, and although his character is
interesting, and sometimes menacing even – especially in scenes where he literally steals peoples energy, kind of like the Mummy in…well…”The Mummy” (1999) –  he doesn’t reach the heights of a truly terrifying villain, as he displays more brute strength than tactical genius, which makes for a simple, yet still entertaining force to be reckoned with. Sadly it is Zoe Saldana’s Uhura and John Cho’s Sulu who seem a little wasted here, though admittedly Sulu does have a standout moment where his piloting skills are put to the test, Uhura however just seems to serve as the motivator for Spock’s actions, and it seems as though Jaylah has stolen a little bit of Uhura’s thunder here. Chekov, played by the late Anton Yelchin, is every bit as good as he ever was, and every scene involving him left me with a bittersweet feeling in the knowledge that this is the last time we will see this iteration of the character, and Yelchin in Star Trek. This somber and bittersweet tone is doubled in the reverence paid towards Leonard Nimoy, and Spock Prime.

Speaking of simplicity, the plot never reaches for anything vaguely labyrinthine. If you’ve heard that it resembles something like a very good episode of the TV show, expect it, as it’s straightforward, beat for beat just progressing forwards at a bombastic pace, but this is by no means a bad thing, in fact it reminded me of “Mad Max: Fury Road” (2015) in its pure devotion to moving forward full throttle. And, like Fury Road, the film is visually stunning, which has always been a strength of this particular offshoot of the Star Trek franchise, and here it is topped; Ships have never looked better, especially in combat, where Lin’s action pedigree carries over nicely here and is a welcome addition. And there’s a certain daftness to proceedings which really amplifies their adventure, without ever allowing things to jump the shark. Action is framed clearly, and every set piece is filled with ingenuity, enough to keep audiences at the edge of their seat.

If you’re a Trek fan, you’ll be extremely happy here, there are a few callbacks (one in particular that gave me goosebumps) and enough focus on the core concepts of Star Trek to keep even the diehards satiated. For the general audience this is a big, hearty, summer bonanza; one that offers something for everyone, an example of Hollywood at its best then.