Rob presents us with his thoughts on the TV Adaptation of Preacher, having never read the original comic book. He’ll be updating us on his findings as the series progresses. Here’s what he made of the Pilot….

I read a lot of comics, and I reckon I’ve done a lot of the landmark series that aren’t part of the Big Two superhero stuff (though I like that too, it’s just harder to keep up). But there’s one series that I never got around to reading, even though I reckon I’d like it, and heard nothing but good things. That would be Preacher.

Fortunately, with the new TV adaptation coming out I saw a good opportunity to A: catch up, and B: give a review of the show on it’s own merits, unfettered by comparisons with the source material.

Here’s what I knew about Preacher prior to watching this week’s pilot episode:

What’s this guy’s deal? Dunno yet, except he drinks beef shakes and talks in subtitles.

I’m glad to report that the TV show hasn’t deviated too much from these key touchstones at this point. The things I thought were in it, were in it. And while Garth Ennis didn’t write the series, it certainly seems to nail his style, that wonderful, heady blend of blood and guts and pitch black humour.

So, Jesse (Dominic Cooper) is this priest, and he’s kind of a crap priest, and nobody seems to like him really, it’s a bit like that sitcom Rev, except he’s also got a bit of that trope western character in him, the ex-badass running from some shady past, trying to be a good man and not quite managing it, because trouble follows him around like a bad smell, and all that. We spend the majority of the episode following him around his parish, mumbling and dragging his feet hither and yon, with everyone vaguely alluding to his past, where he did things, which seemingly involved beating seven shades out of people, and him enjoying the hell out of it. (There’s a fantastic shot that sticks in my mind, this little, tranquil smile as he punches a guy right in the face.)

But intruding on the quiet desperation and conventional crime is some real weirdness, first up there’s Cassidy, the vampire, who’s very Irish and bloody brilliant, also there’s Tulip, who’s Jesse’s ex(?) or something, both of whom are exceptionally violent people, and are introduced to us in a pair of gleefully unhinged action sequences, somewhat reminiscent of Matthew Vaughn movies like Kick-Ass and Kingsman: The Secret Service. Joseph Gilgun particularly impresses as Cassidy, who even though he’s a murderous ghoul, is also instantly likeable, and to my mind, not a million miles away from what Spider Jerusalem would be like, if they ever made a TV show of Transmetropolitan. 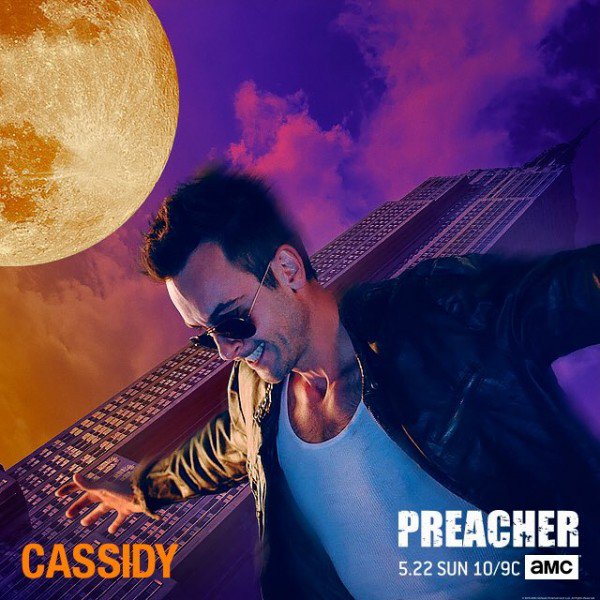 There’s also this creepy, teabag-eating ‘Mr Wint and Mr Kidd’ type duo, who are traipsing around after exploding priests around world (I’m just going with this for now, seems like it’ll be explained more in time).

I don’t think it’s all that spoilery to say that by the end of this episode, Jesse had gained some kind of power, as I think the series will kind of hang on that. Precisely what his power entails is not fully explained, but it does have some pretty shocking unintended consequences right away.

It remains to be seen what the series as a whole will be like, but the pilot has impressed me hugely. Pilot episodes have a tough job to do, setting up all the characters and premises for an ongoing serial, and even beloved show’s pilots can be lengthy slogs as they trudge through everything you have to know going forward. Preacher has avoided that, largely through its humour, and the brash confidence of its action, one only hopes the impressive, almost movie-level production values and inventiveness can be kept up throughout the run, it would be a crying shame to waste a start as strong as this

Preacher is showing on AMC in the US, and on Amazon Prime here in the UK, watch out for Rob’s continued reactions in the future.

One thought on “Preacher: An Ignoramus Reacts”