Judge Dredd: Titan centers on Dredd’s deployment to the titular, Titan, the host of a prison that houses Judges that have fallen from grace and subsequently hidden from the public eye so as to not shake the Judge’s image of absolute justice. Joe is sent there in light of a disturbance, and what ensues in the graphic novel is a multi-arc story that bares all of the hallmarks of an important slice of Big Meg history. 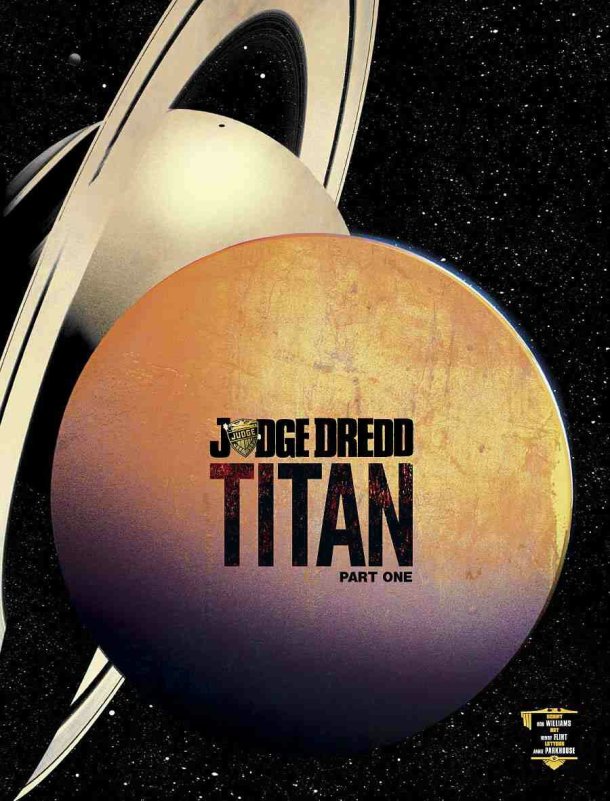 Titan was actually the first Dredd tale I ever experienced, for I discovered 2000ad rather late in my life – skipping my teenage years completely – and as such, holds some sort of weird place of importance in my – now established – Dredd appreciation. I remember only catching the first arc of the story in the weekly 2000ad magazines and being immediately sucked in by the stark and all at once, viciously mesmerising artwork of Henry Flint. And ignorantly, was further drawn in by the notion of Judge Dredd in space. I’d finished the first arc and thought the story complete…

Fast forward to now, when I discover that the story goes further than that. Much further. This book is comprised of Titan, Fit, Enceladus: New Life, Enceladus: Old Life & Melt. All written by Rob Williams, and for the most part drawn and inked by Flint, with guest artwork by D’israeli. And I’m delighted to say, that for the main part, it provides a satisfying high stakes yarn, replete with a deeply relevant questioning into the distinction between a person, and a perp. And some really meaty exploration into Dredd’s psyche when faced with a decision that forces him to be at odds with his need to stop criminals, and his sense of duty towards the law he wishes to uphold. It’s easy to say that the villain here – Nixon – pushes Dredd to the limit, and in some instances, brings to light old fractures in his mind that her actions exacerbate. She’s takes a rather memorable turn in a great roster of characters, and there’s no denying the importance of her role in putting Dredd on a murkier path than we’re perhaps accustomed to. There’s even a rather sweet buddy cop-esque turn, when Dredd is shadowed by SJS member, Judge Gerhart – who is somehow more Javert than Dredd himself (and one of my favorite elements of this tale – If you’re reading this, Tharg, I want to see more of him). Certainly there are some terrific moments of heroic bloodshed – for the John Woo fans – which seems to be a staple of Dredd tales, and I must admit, I find myself growing fond of – and in general this is a solid collection that provides a mix of finality, wracks the Big Meg with more unneeded woe, and puts Dredd through some very dicey situations.

The art, as I’ve said previously, is captivating at points, It is graphical in ways that remind me of Mike Mignola’s, albeit with a larger colour palette. And, oppositely, there are moments where scenes utilise a limited palette to achieve great effect.  There’s a certain ‘grubbiness’ that’s been applied that really fits with the gritty tone mainline Dredd stories often take. As such, the art benefits the story by expanding on an already large story, lending weight to panels, that ultimately transcends them from 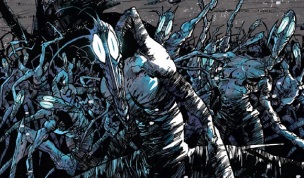 mere comic panels, to something more filmic. That being said, I do have some small issues – without straying too far into spoiler territory – and they’re mainly to do with some design work on the monsters that show up halfway through the book. They’re slightly goofy, and personally, that goofiness lessened the impact of certain scenes purely because I found it hard to take them seriously.

However, despite that, Titan is a well rounded experience that will likely have ramifications in the larger story of Dredd, particularly with his long-developing distrust of the system he is a part of. Coupled with the events on the Day of Chaos, this forms an interesting chapter in Joe’s history, If you’re a Dredd fan, you already own this. If not – why not? – pick it up, it contains everything that I’ve come to love in a good Dredd tale, high stakes, Dredd surviving almost insurmountable odds, Otherworldly entities and a dissection of the pitch black morality surrounding the position of Judge, and as such, serves as a marvelous jumping on point to new or lapsed readers!

Plus, the art is great!

Judge Dredd: Titan is available digitally and physically at the 2000ad store now!