After last week’s Kaijumax post, Joe had his question answered; Where is Kaijumax Season 2? Apparently the first few issues were already out. Here’s why you need to read them…

I am glad to say that Season 2 continues the marked quality of Season 1, Zander Cannon has swapped out the prison environs for the more nostalgic vistas of a city – perhaps awaiting a kaiju induced spate of destruction, as we are quite accustomed to within the genre.

Here, we start to see another side of the Kaijumax universe, the world of Kaiju that conform under the boot of the humans. Our gateway into this side of things is the brother of Green Humongos, Red Humongos. Red is a completely downtrodden Lizza that seems ostracized from both humans – sympathetic and unsympathetic alike – and his Kaiju brethren. Again, Cannon conveys a sense of melancholy hanging over these creatures, and it’s really something that makes Kaijumax the compelling read that it is. There’s an almost “Pixar level” sense of pathos in these characters, where Cannon treats them with a very tight notion of who they are, and what living in this world means for them. Giving Red the very real worries that come with being on parole and keeping to his parole conditions really add to the drama, and make for a wicked pay off towards the end of issue #3. 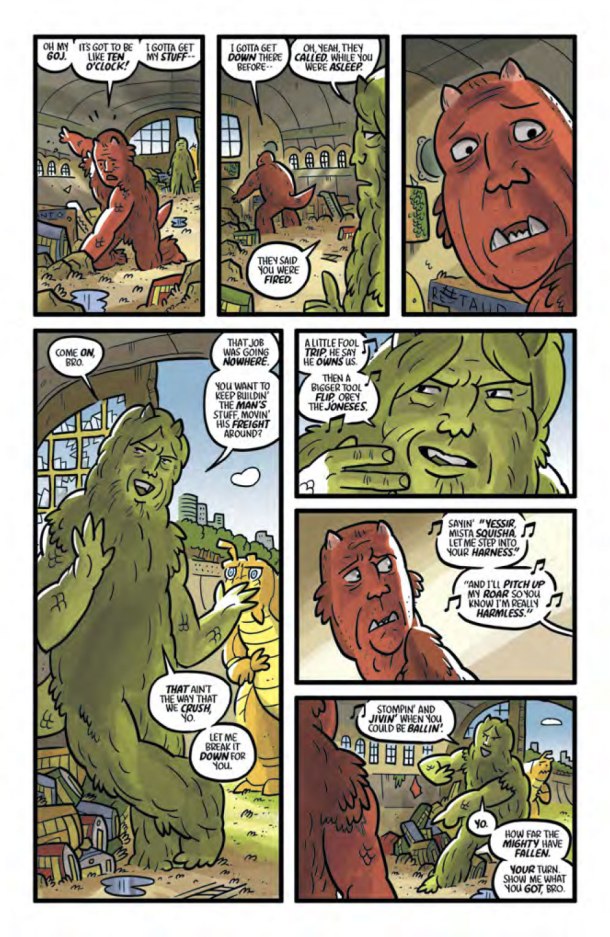 The chaos caused to Red, by the escaped convicts, Green and Electrogor, makes for some entertaining moments, one which sticks in mind is Green’s insistence on sorting an altercation with his brother out via a rap battle. And it’s moments of levity like these, interspersed between the serious, the melancholy and the gruesome moments that really help push the title into much broader zones, and in my opinion, able to be enjoyed by a much broader audience than the niche qualities of this title at first suggest. We’re also treated to an extended look at a very human story in issue #3, and without giving too much away, it’s definitely one of the series high points as it continues to play on Kaiju nostalgia (particularly Gamera) it also serves up some brilliant character moments for the Warden and a new character – Nobuko Matsumoto. 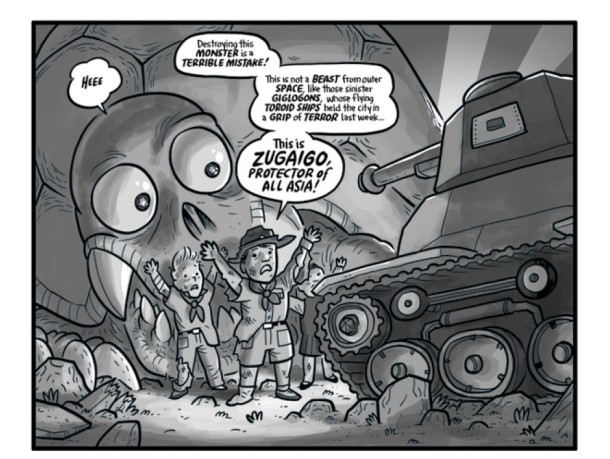 Speaking of expanding the universe, we also get to see the ways in which renegade Kaiju are dealt with in the outside world, and in that we are properly introduced to another character, Mecha-Zon’s sister, Chisato. A sometimes big, sometimes small robot girl, who, I think, suffers most, in these first 3 issues. There’s also an interesting subplot developing between her, her father and his creations which I look forward to seeing develop.

It has to be said then, that the quality I so enjoyed in the first season is back here in spades. I suppose I cannot help but feel like there’s more to this franchise, be that either in the form of an adult swim styled TV show (of course, you must get Seth Rogen to voice Green Humongos, that’s how he sounds in my head, Maybe John C. Reilly would be a good fit for Red? Maybe this should spawn its own article…) or just some form of animated extension. Perhaps it’s silly of me to expect everyone to feel this way, but I am so taken with this series that I want to see it go from strength to strength.

If you still like Kaiju, Comics, Prison Dramas, Rap Battles then I implore you to check Kaijumax out.

“Kaijumax Season 1” is available on Comixology and physically at Amazon and other retailers.

“Kaijumax Season 2” Issues #1 #2 #3 are available on Comixology and all good comic suppliers.

Check out Zander Cannon’s blog for up to date “Kaijumax” information.

Now, if anyone could direct me to the Electrogor soft toys?