The prequel series “Gotham” sees it’s second season release for home video this August, Joe sat down to check out the Blu Ray release, having not seen the first series and only hearing mixed things about it, this should be interesting…

Having not seen any of the first season of “Gotham” it seemed like I would be lost amidst many lingering plot threads left over from Season 1. So, I knew to a certain extent I’d be relying on preexisting knowledge of certain characters and going in blind with a few others. Thankfully I can say I wasn’t too lost – if at all – and this review can proceed in earnest, mostly.

For those not in the know, Gotham is a prequel to…Batman’s life. Focusing on a young Jim Gordon as he struggles against a growing rogues gallery as well as striving to clean up the GCPD and its corrupt members. Also focusing on a younger Bruce Wayne whilst in the throws of losing his parents and uncovering the mystery behind their deaths, supported by his butler, Alfred. These are roles you’d expect to see at the forefront of anything Batman related, though Gotham’s unique additions show in it’s extra focus on The Penguin and The Riddler. In fact, I’d go so far as to say that these are the best takes on villains that I’ve seen in a long time, including the Marvel and DC Cinematic universes; they’re flawed, irrational, devious and ultimately sympathetic.  But this caveat is mirrored in the shows heroes, which really hits home the duality on display here, and the fact that anyone in the Gotham universe seems to be one bad day away from becoming a villain.

In general, it’s the cast that makes Gotham so compelling, in spite of the sometimes camp nature of certain villains and their costumes clashing – Victor and Firefly in particular – with the gritty and realistic aesthetic that the show strives for in both writing and design. This can be viewed as one of the show’s selling points though, as admittedly it is these bursts of bizarre and acrid flavors that set Gotham aside from typical police procedurals. In many ways, Gotham could be the perfect gateway into the superhero genre for those that can’t quite muster the energy to engage with the much weirder narratives of, say, Guardians of the Galaxy or Suicide Squad.

I can certainly say that I didn’t half expect to enjoy the series this much, and become engrossed as much as I did. To start, Ben McKenzie plays a brilliant turn as Jim Gordon, imbuing him with a kind of downtrodden chagrin mixed with an uncanny amount of determination. His story is a discussion on the lengths one can and should go to, to do good; and when does it become necessary to break the law in order to achieve moral justice. He’s the perfect person to center on, the every-man of Gotham. 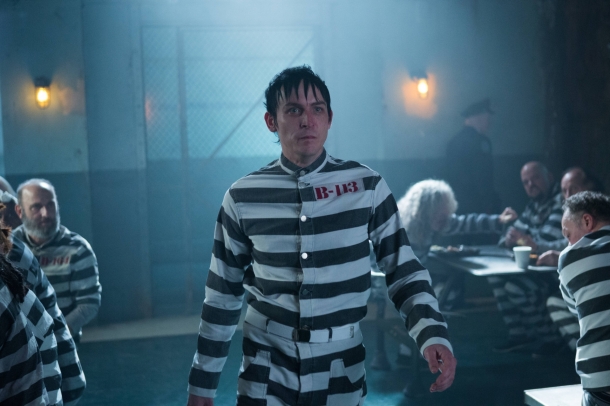 In terms of interesting character arcs, The Penguin’s story was a particular highlight for me, and I often felt myself silently rooting for him as his world goes from bad to worse, especially in later episodes where he meets a long lost family member; Similarly with The Riddler – without ignoring his psychopathic tendencies – stole every scene he was in and I often had to catch myself from cheering them on too much. Hugo Strange appears here, but he is much the cliched villain, and not even B.D Wong can save the role from being anything more than mediocre. However, socialites/villains Tabitha and Theo Galavan are interesting enough, replete with implied/not so implied incestuous undercurrents, these two are an interesting addition to the pantheon of Gotham villains, pushing Jim, Bruce and The Penguin to their respective limits. It’s Theo in particular that drives a lot of the show’s drama, and gives the series the payoff it deserves during the finale.

The story progression over the 22 episode run felt well paced, and contained an overarching story line that neatly ties elements from the second series together come the finale. There’s a great balance that has been scored here, where there are a few mini arcs that seem to resolve themselves within 5 or 6 episodes, only to see them become entirely relevant by the finale whilst also leaving room for those expected tasty breadcrumbs leading into Season 3.

In terms of this series greatest weakness, it is definitely in its less developed villains – the ones that serve as “monster of the week” to keep the series running. They’re a necessary evil in shows of this ilk, but I do sometimes feel that we could perhaps shorten the series length to keep a tighter focus on the characters that actually matter. Dare I say it – like they’ve achieved in Daredevil – But I am in two minds about this statement, as I really enjoyed the inclusion of a myriad of plot points and mini-arcs that can only be achieved through longer series like this. The only time I felt that this “monster of the week” approach was justified was with the inclusion of Jerome – the Joker before the accident at Ace Chemicals – who’s brief presence was a great way of setting him up as a future player in the Gotham universe.

In terms of the actual release, I looked at the Blu Ray set; the picture and sound are of exceptional quality as I’ve become accustomed to with these shows, and there’s the expected extras – “ALFRED: Batman’s Greatest Ally, Gotham by Noir Light, Cold-Hearted: The Tale of Victor Fries, Character Profiles, Gotham: 2015 Comic-Con Panel & More!”

Despite my small critique, I feel as though there’s such an amount of good here, that the shortcomings are just that, They detract in the critical sense, but there’s so little of them that even as I write this I realise just how enjoyable Gotham was, and how much of a surprise interest I now have vested in this series. This is currently DC’s strongest TV property, its appeals are wide and broad and I hope it serves as a gateway into the larger DC universe.

Now that’s done, I probably should catch up with Season 1! You can order season 2 here.