Comics / Comics You Should Be Reading / reviews

Misty, one of the British comic industries female focused answer to 2000AD – devised by Pat Mills no less. And Joe had the distinct pleasure of its company on a rather bumpy plane ride to Italy. Here’s what he thought… 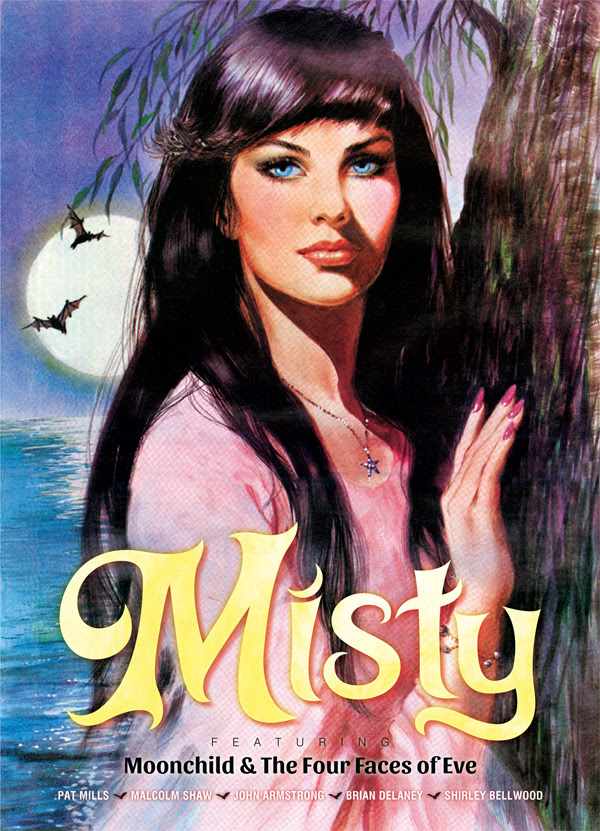 I actually read most of “Misty” on a plane bound for Venice. As such, my review is slightly tarnished by fear, pressure build up and stale air. All jokes aside, I knew going in, that I wouldn’t be the intended audience here.

But did I let that stop me? Did I fuck!

You see, I ignored all of that. In fact, it’s a running joke that I don’t really read comics traditionally aimed at men. I could quite happily sit there and read “Lumberjanes” for instance. But none of that is important. Because as a comic fan, my interest surpassed such mundane boundaries, for this release of “Misty” is – in my opinion at least – not really about the stories inside. It’s much more a curio of a bygone era, something that fans of the medium, and in particular, fans of British comics, shouldn’t go without.

The stories inside were kind of standard fare. Both of them being an easy read – it’s easy to see why these were so popular in fact, as the constant cliffhangers would have had me shelling out each week, if it was socially acceptable back then – but ultimately they succumb to their nature as graphical one liners, all they can provide is the promise of more light entertainment. One of them (Moonchild) feeling a little too close to an unlicensed “Carrie” comic. The other (The Four Faces of Eve) feeling more original, and something resembling an old Hammer film. These comparisons and failings are at least mentioned by Mills in the foreword to this release, which is a nice touch. It’s always nice to see someone discuss their own work and projects honestly. The successes here are really the tone and absolute pin point control over the setting. This feels very much like a slice of Britain 30-40 years ago, so much so that my head was already filling in characters voices with stock “Ealing Studios” voices that had permeated my brain in those two years of Film Studies classes. I think I even had one of the kids from Bedknobs and Broomsticks turn up there.

Moving away from the content side, contextually this is an interesting release, as it almost has the feel of a time capsule, which Is why I feel like this release is important, despite it’s lack in the story department. At its core, Misty was to give 2000AD a run for its money as girls comics were outselling boys at the time, and it seems like we might be seeing that trend, without the distinction of “boys comics” and “girls comics”make some kind of resurgence. Here’s a quote from the foreword from Mills himself –

I’ve always regretted not creating Misty the way I created 2000 AD. I’ve little doubt if I had, it would still be around today and it could have changed the British comics landscape for the better. Alas, Misty eventually died, but it’s still well-thought of to this day.  Many of us hope it could be reprinted with collected stories, just as 2000 AD stories have been successfully collected. And here they finally are!

Certainly, with Misty’s focus on a more paired back, less bombastic form of storytelling it’s easy to draw comparisons to the current comics climate we find ourselves in, with things like “Paper Girls“, “Lumberjanes” & “Rat Queens” getting rave reviews and generating dedicated followers. And for that, I think it’s right to acknowledge the effect that this kind of storytelling has on changing the demographic and view of a “comic nerd”. For it isn’t and seemingly never was the shabby black tee, blue jeans guy. It was the girl next door, looking to sink her teeth into the next tale of supernatural horror and schoolyard political intrigue. I’m glad that this release informs of that, because I’ll feel a little less guilty for these guilty pleasures.

I think this is an important release, one for fans of the medium rather than your general purveyor. If you’re one of those aficionados, then you’d do well to add this curio to your collection. Having said that, I don’t know if continued releases in the Misty line would maintain this notion of it being an artifact of a bygone era, and this is something I think 2000AD should think about going forward. As the stories inside aren’t strong enough by today’s standards, to warrant continued following.  At £14.99 though, I feel like this release is tantalizing enough to warrant the asking price.