Comics / Comics You Should Be Reading / reviews

Tumor, published by ONI PRESS, is a hardboiled noir thriller with a twist, you see, it’s described as a ‘medical noir’ and the conceit here is that time is fluid because of the cancerous growth in the main character, Frank’s, head. This leads to all manner of aberrations within the plot, structure and the fabric of reality itself, Joe sat down to see if timey was indeed wimey in ‘Tumor’…

“Tumor”, written by Joshua Hale Fialkov, art by Noel Tuazon, sees private investigator Frank Armstrong navigating a missing persons case that falls into his lap by way of a shady meeting with gangster and drug kingpin. His mission, reluctantly accepted, is to find the drug lord’s daughter. Then Frank discovers he has a brain tumor.

I’ll start things off by saying that I struggled to find anything I didn’t like here. In fact, there isn’t anything I disliked. “Tumor” is special, it’s something rare, something of a pastiche on 1930’s noir flicks, something more contemporary. But it’s more, it’s an examination of losing oneself, of feeling intense regret and sadness, of metaphorically putting things right. Of being forgiven.

I think this is perhaps one of the only times where I feel like every element in a book has been totally in sync and complementary to each other – to the point where you forget you’re reading a comic book. The writing here is absolutely fantastic, in the sense that Fialkov allows us to empathise with Frank’s situation, despite his grizzled demeanour. It’s bleak, in a sense, to watch a man carry on in the knowledge that his death is imminent; to carry on going in absolute spite of it. And for Frank to be depicted so honestly too, is something I absolutely loved about “Tumor’. He’s not a likeable character by any stretch of the word, but by virtue of his actions and drive to do one last good thing and get the job done is addictive to the mind. His conditions affect on his mood and his grasp on time make for some really interesting scenarios, especially when confronted by a doppelganger for his dead wife/the drug lord’s daughter. This thread in particular was satisfying to watch unfold and lended Frank an incredible amount of pathos and relatability when the inevitable questioning of “why are you trying to finish this case” pops into your head.

Straight away I can applaud the choice of art style. Tuazon terrifically nails it here, On first glance (and I mean, absolute first glance, corner of your eye, paying attention to the TV kind of first glance) you might mistake the fluid and rough appearance of the lineart as a low-end effort, but after a few pages it slowly begins to make sense. This is one of the few examples in a comic book where the line art becomes reflective of the narrative in more important ways than to just convey a sense of action or emphasise an important story beat with a splash page. 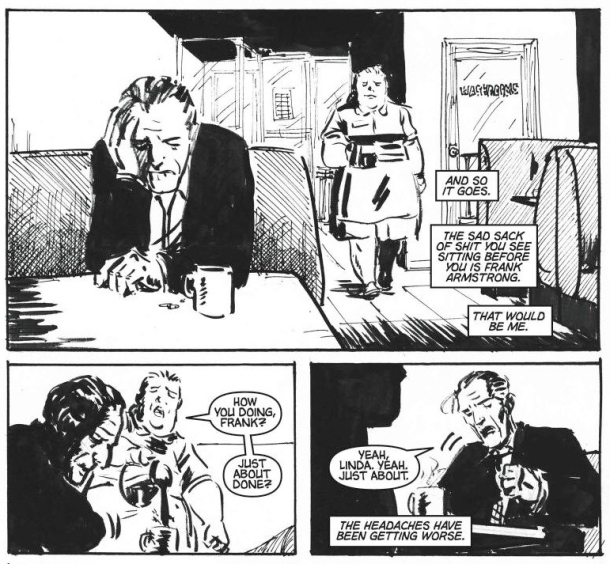 You see, in more cogent elements of Frank’s shattered grasp of time, linework is bold and dark whereas in moments where his condition is exacerbated by stress or just the general state of his condition, things become softer, washed out, where the artist has applied a light touch of ink and just hinted at shading. This is most interesting for me, for Frank’s definite memories are easy to pinpoint, but as the delirium of having a brain tumor has it’s way with Frank’s head things become less solid, less real and instead more mixed up, more interesting.

I’ve not experienced a truer way, in any artform, (save for obvious comparisons to Christopher Nolan’s “Memento” ) to depict a sliding memory – a lost sense of time and self – and I think this is “Tumor’s” greatest strength. It certainly rang true with me, as It allowed me to further empathise with my own Father’s journey into dementia, and the inconsistencies in time that it brings with it. Seeing the person within the condition still fighting, still trying to be, was sobering for me. You’d be hard pressed to find something that has an emotional core as strong as this, and I can only give it my highest recommendation.

The deluxe hardback edition of “Tumor” is available now from all good comics retailers.