Brad dons his pith helmet and goes on safari with the latest offering from the Asylum, Zoombies.

Just days before the Eden Wildlife Zoo’s grand re-opening, a monkey begins exhibiting signs of a strange virus which makes the animal extremely aggressive.  When an effort to save it fails, it confounds the laws of nature and returns as a terrifying undead monkey, killing its handlers and infecting others of its kind.  So far, so good, right?

As the newly-undead capuchins break free and rampage through the enclosures, they viciously attack the other animals and spread the contagion; as zombie infestations are wont to do.  As the whole zoo rapidly becomes infested with these abominations, the zoo keepers find themselves under siege and outnumbered, and have only hours to stop the outbreak before the Zoombies reach the birds of prey exhibit, which will obviously open up a whole other can of worms.  Birds.  Wormbirds.  Zormbirds.

These sort of intentionally-bad, post-pub movies are usually hard to review.  After all, if a movie tries to be bad, and succeeds…is it a good or bad movie?  So, from now on, I’m just covering all bases with the question “is this movie fun to watch”?  The answer, in the case of Zoombies is yes.  It’s a hell of a lot of fun from start to finish.  It’s brainless and it’s bollocks, but it’s fun. 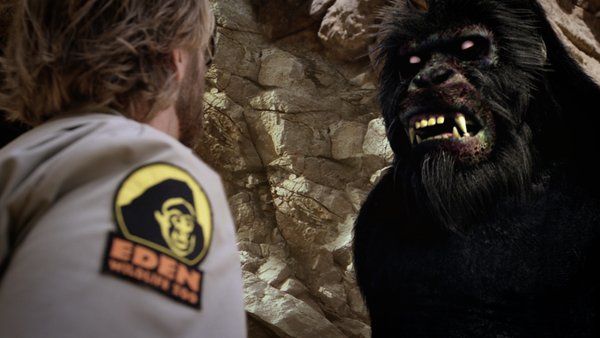 Obviously, plot wise, it’s a rip of Jurassic Park, albeit with zombies.  The same beats are here – especially in the opening segments, in which there are zero surprises, plot wise.  Unlike Jurassic Park, however, the CG is uniformly awful.  Yeah, it kind of works as what it fast becoming almost a trope of the genre, but…it’s still just bad.  A little more spit and polish would have gone a long way, even in a movie about zombie monkeys.

With that said, the monkeys frequent prove to be genuinely creepy little bastards.  They’re fast, and they’re violent, and the noises they make are more than a little scary, mixing xenomorph like hisses with banshee howls in a genuinely unsettling audio cocktail. 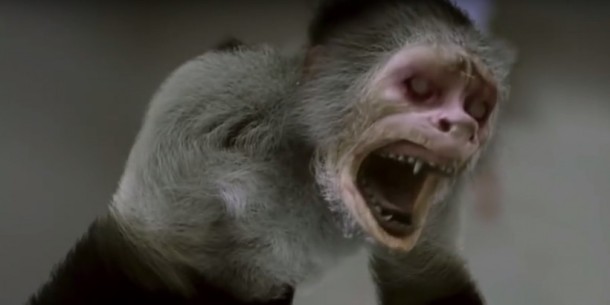 This movie also scores a bonus point for including rabid killer giraffes.

The low budget is obvious at several times, mostly in the CG, but especially with the blue screen work, which is so genuinely awful I could believe that no-one who turned up that day had ever used the equipment before.  It’s genuinely bad.  Breaking suspension of disbelief bad.  The kind of bad that could only have been done on purp-oh.

A great, post-pub movie for watching and giving the MST3K treatment.  A good bad movie, that’s equally fun on your own if you’re in the right mood.

Brad Harmer-Barnes is a writer for Suppressing Fire, Fortress Ameritrash, and other publications, as well as The Werd.  He likes Gatorade, fish and chips and Twinkies.  You can follow him on Twitter and Instagram @realbradhb.