After ‘power-watching’ “Legends of Tomorrow – Season 1” & “Arrow – Season 4” in the span of two weeks, Joe explained that the thought of doing another series so soon sounded a bit daunting. So he decided to watch “The Flash – Season 2” in as short a time as humanly possible. Did he survive the ordeal? Did he set a world record for watching an entire 23 episode season? Did he instead think it was a better idea to go back in time to stop himself from watching all of this TV and in doing so creating a ‘Crouchpoint’ phenomenon that resulted in the end times? Check out his addled thoughts below…

My mind is heavy with the fog of generic superhero music, CG battles and energy flares and Superhero melodrama. Did I really want to put myself through another series so soon? Yes…Luckily for me, that show was “The Flash“, and how happy I was to know that. You see, “The Flash” is the darling of the Arrowverse in many ways; currently holding an 8.2 rating on IMDB – a few points higher than Arrow – “The Flash“offers up a different slice of The CW pie. If “Supergirl” was glib and light entertainment, and “Arrow” was a much more sober, darker take on the superhero, then “The Flash” sits somewhere in-between. Offering both tones in a fairly well mixed cocktail, “The Flash“is the perfect antidote to “Arrow – Season 4“; don’t get me wrong, Overall I enjoyed the season, but I felt that there were a few duff episodes along the way, you can read my extended thoughts here.

“The Flash“suffers none of that, there is apparently something to be enjoyed in each episode. Spanning 23 episodes, you’ll see the likes of King Shark, Gorilla Grodd, Zoom, Reverse Flash, Captain Cold and more (Yes, the same two crossover episodes with Arrow are included here, smart move). I’ve spoken before, about how impressed I am with the level of CG effects in the previous Arrowverse shows I’ve reviewed, but they’re probably at their best here. I mean it. 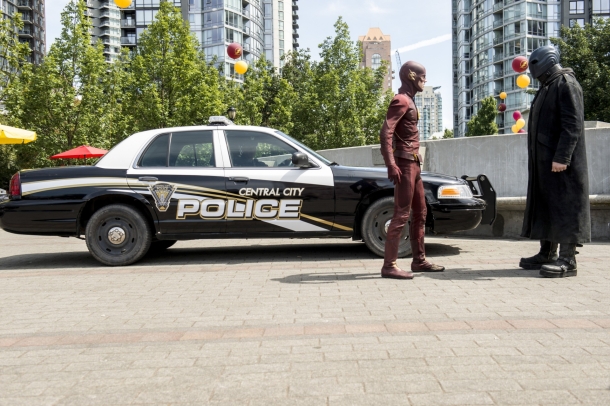 What sets “The Flash” apart from Arrow, is his distinctly non-human rogues gallery, granted, Zoom and Reverse flash are humans, but they chose to include the likes of Grodd – a telepathic gorilla – & King Shark – a shark/human hybrid – that elevated the show from feeling cheap, into something you’d be happy watching at the cinema. In fact, because of his powers & rogues gallery, the show has been forced to showcase a much more dynamic range of action scenes, some are occasionally ropy – with some rather obvious CG body doubles – but for the most part they capture the spirit of the comic book, thus becoming the closest and truest Comic-to-TV adaptation. Speaking of the rogues, this season unfortunately does succumb to the ‘Monster-of-the-Week’ patter of all shows of this ilk, and it is a shame to an extent, though it is apparent much less in this show, than others. To have a show contain such drama, whilst also being as entertaining as a Saturday morning cartoon is a very tricky thing to nail, and they’ve absolutely done it.

What do I love about this series in particular? The casting is spot on, Barry is extremely likable and his supporting cast all bring their own thing to the table, Cisco’s interplay with characters and referential way of speaking makes for really compelling viewing. It only gets better in this season, with the inclusion of Jay Garrick (Earth 2 Flash) and the Earth 2 version of Wells among others which I won’t spoil the reveal of. The will-they-won’t-they romance between Iris and Barry is back and enjoyable to follow through, they’re a sweet pairing – like they’ve always been – and you’ll have to watch the season to find out what happens between them!

Plot wise, again this is the strongest out of the series I’ve watched whilst reviewing for The Werd, Barry’s course through this season is mired by tragedy, relationship issues and revelations galore, it’s a perfectly measured trail through the 23 episodes that entices with enough downtime between the showcase episodes to allow for offbeat moments between the cast. Thankfully, Zoom, the big bad for Season 2, is a complex and compelling Villain, one that backs up his bark with a severe bite. In fact, that’s where the Arrowverse succeeds; its Big Bad’s are always well developed and compelling characters. Kevin Smith makes an appearance as director for an episode here and it is – as you’ve no doubt learned already – one of the best in the series, it somehow compacts everything that is good about the series in one episode, allowing for high stakes, emotive storytelling and some incredibly funny offbeat moments. In creating the series like this, pacing the narrative beats so well, characters are all allowed to breathe and grow before you, something that I hope they can transpose to the other Arrowverse brands, as this formula really shines here. The supporting cast doesn’t detract here, but rather builds Barry up, and to be frank, they just don’t bore like the supporting cast of Arrow sometimes do.

Extras included on the Blu Ray include Behind-the-scenes VFX on select episodes, Various Featurettes, Deleted Scenes & the Gag reel. Absent is the usual comic-con panel recording that has featured in previous Arrowverse TV releases, which is perhaps a shame, but the included featurette of Kevin Smith’s involvement in the creation of episode 21 is more than enough to make up for that.

I think it goes without saying at this point that I’m quite enthusiastic about this season of “The Flash“. Although it does suffer some of the same pitfalls as other shows of this flavor, I found it to be the perfect antidote to the ‘grimdarkness’ of Arrow, and to an extent Legends of Tomorrow. It has a lot of heart, enthusiasm and ultimately is just a whole lot of fun. The bare essentials of proper TV escapism, and the core of what enjoying a superhero flick should be about – Sometimes its nice to not have to endure a meditation on what having superpowers means to existence itself – If I had to sell the Arrowverse and the larger DC TV universe to a non-fan, this is the series I would recommend, in short, I loved this season of “The Flash“, go and buy it.