So it comes to this, the main property of the “Arrowverse” Arrow. Newly released in an all bells and whistles DVD/Blu Ray Box set is the fourth season, charting Oliver & Felicity’s not so relaxing return to Star City after seemingly driving off into the sunset at the end of Season 3. Joe’s watched this, read his thoughts below…

There is one spoiler below, if you’re bothered then catch up on the show first! 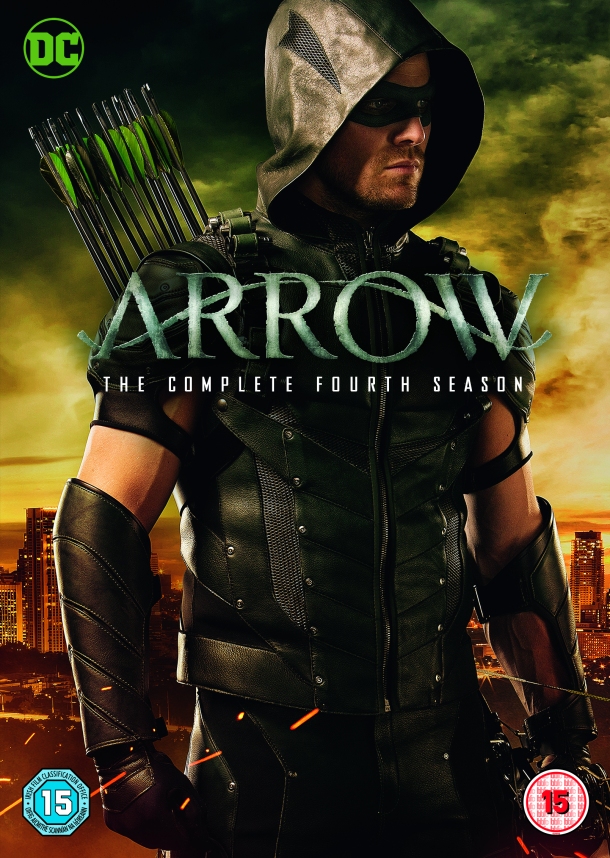 So, it’s time to review the show that’s arguably, The CW’s foundational property within the “Arrowverse”. Arguably? Definitely. Though “The Flash” does seem to be everyone’s favorite right now. Does this latest offering in the Queen Saga deliver? Or does it perhaps dissolve into a caped farce? Here’s my thoughts on the series thus far, and where I hope to see it develop as it goes on…

Perhaps a tad strange for me as a reviewer, to experience season 4 of the Arrow after watching the first series of “Legends of Tomorrow“, as chronologically at least, Arrow Season 4 takes place beforehand, as a lot of the events in this series serve as a ‘lead in’ for events taking place in Legends. Indeed, I had even missed the wonderful crossover episode with Constantine – which made me rather melancholic on viewing, as I, and I guess, a few others, really lament its cancellation. Seeing Matt Ryan in the role one more time served as a bittersweet reminder of the loss – but we don’t want to jump in at that point. 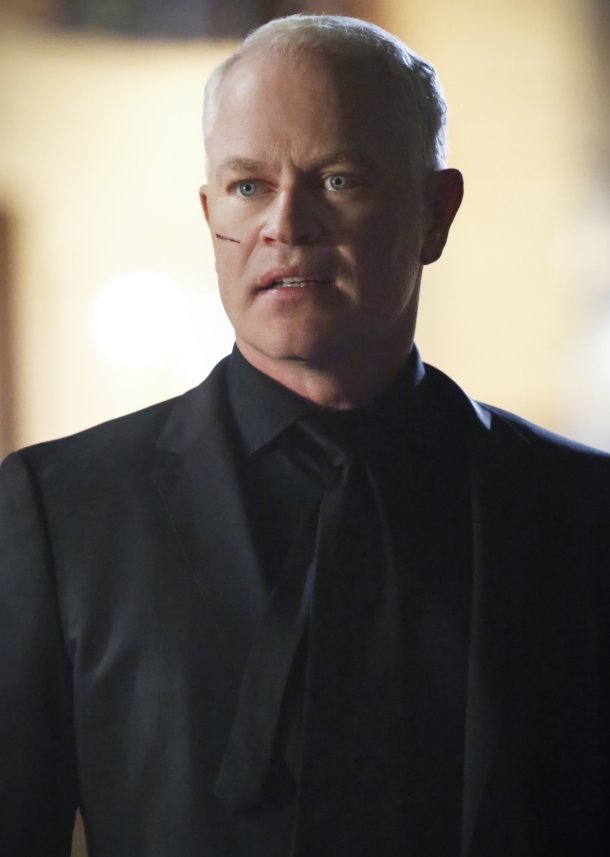 Season 4 culminates with Oliver Queen’s struggle against Damien Darhk (Neal McDonough is compelling as Damien Darhk, and his presence injects the series with a good bit of danger for Team Arrow, especially with his connection to magic) and various set ups for the spin off show “Legends of Tomorrow“. All the whilst running a subplot set in Queen’s past as he deals with yet more issues (one of which being Constantine), though the interest here is seeing Queen develop his moral compass in the face of the extreme behavior of the ‘mercs he finds himself working with. Oliver also comes to the conclusion that he can help his city more if he stops fighting in the shadows, to this end he runs for mayor, figuring that his strongest selling point is not being a politician, this adds a much needed maturity to Oliver, who up till now, seems to have been a character ‘in progress’ for a long time. This season also fully injects Magic into the Arrowverse – Though Constantine did indeed serve as the actual introduction (I’m not bitter at all, I promise…) – this series has it as a focus, leading to some really interesting episodes focusing on the team figuring out how to deal with such threats. It’s always interesting in a show like this, or indeed in the comics, where a hero that has – up til now – relied on physical prowess and gadgetry alone, deal with something they have not prepared for. And this is where the crux of my interest sat for most of the series.

There are interesting tangents here, as I’ve mentioned before, the revivification of Black Canary – Sara Lance – (leading to her appearance in LoT) and there are some nice moments where Quentin has to rationalise his daughters return. And the rescue of Atom after being trapped for 6 months, is a series high point, Brandon Routh is impossible to hate on, and I enjoy him as much here as I did in “Legends of Tomorrow”. Ra’s Al Ghul’s daughter, Nyssa, enjoys a memorable subplot with Malcolm (John Barrowman, on top form here. I’ve missed his face), as she tries to struggle control of the League of Assassin’s away from him. John Diggle has some great moments here as he strives to learn the truth about his brother’s fall to H.I.V.E, and shares some great scenes with Oliver, as he flits from falling in and out of his friendship with Oliver. The absolute best overarching thread this series offers though, is Oliver and Felicity’s struggle against Damien, and let me reassure you, things take an absolute nasty turn here about midway into the season; Pushing my concerns that show runners were ‘playing it safe’ narratively, to one side.

However, it’s not all positive here; In terms of general viewing, I do find myself spoiled by Daredevil – it might have a smaller run-time and perhaps even a bigger budget, but it does manage its action scenes really well – Unfortunately “Arrow” fails to force me into any excitement with its own action, it might be that the show has run so long that it has fallen into a patter, into a routine that saps any ingenuity, that ends up with “THEY FIGHT” written on the script rather than any form of direction. It sure seems that way; They’re functional, they convey the idea that these people are fighting, but they do feel secondary to the cause of the Green Arrow, rather than an extreme occurrence in his life. Which is a shame, as I remember enjoying the fight scenes from the first series, and remarking on how fresh it all felt. Having said that, there are some moments I greatly enjoyed, including the entire Flash-Crossover episode, including *that* magnetic arrow.

Now, I did mention that I enjoyed the tangents taken here, though ultimately they have an effect on the show. With the increased time given to the characters in Oliver’s life, a portion of  focus on Oliver himself is lost. Perhaps the show-runners feel as though enough exploration of his psyche and character has been done over the previous 3 seasons, but I certainly think the show suffers for it’s expanding roster, and do find myself questioning how many more seasons Arrow can go on for. I do feel like – to compete with Marvel (sorry, I said it) – Arrow is going to have to get its act together a little bit, trim the fat and frame its action in a more energetic way, or at least, make sure there is some narrative impact from these abundant scuffles. Though, to be totally balanced here, I must admit, the moments we do spend exploring the growing pains in Oliver’s new mission are dramatic, potent and well acted. (Spoiler Warning) with my absolute favorite scene being the one where Oliver finds out he’s a father.

Overall, I enjoyed this season, as I have done with previous ones. But I have come away from the experience thinking that the creative team need to shake things up a bit. This is by no means a bad series, in fact, there’s moments that showcase the best in modern superhero narrative & there’s plenty to enjoy here, with series high points seemingly always being the crossover episodes, and the enjoyable ‘lead ins’ to “Legends of Tomorrow“. If you’re already invested in Arrow, then this is already on your wishlist, if not, check the first series out, or watch The Flash. There’s something for everyone in the Arrowverse, which is its best selling point.

“Arrow – Season 4” is out now and available on DVD, Blu Ray and Digital HD.