Released earlier this year on Amazon Prime here in the UK, “Lucifer” marks this iterations first outing on TV/Streaming services – now in its second season – It’s first has just been released on home media and Joe’s got his hands on it, will he enjoy it’s salacious charms? Or has hell indeed frozen over and left him cold?

Whether you call him the Devil, Satan or Lucifer, no doubt you’re aware of the abstract concept of a pointy headed douche ready to dole out punishment to sinners in an equally abstract fiery pit. DC Vertigo’s take on the character “Lucifer Morningstar” started life in Neil Gaiman’s “The Sandman” which later spun off into his own solo series. The character has been around for awhile then, and it comes as no real surprise that a TV Show would eventually spring forth.

What is a surprise is actually how good this adaptation is. And, I’m speaking from a completely ignorant perspective and just judging the show on its own merits, for you see, I’ve never read any of DC Vertigo’s run on “Lucifer“, bar his appearance within “The Sandman“(1989). The character there was partly based on the appearance of David Bowie, and the character read as a sassy and tired Goblin King. Tired of his responsibilities in hell, just wanting to go on vacation, the almost “teenaged” Lucifer in this instance was wildly inventive at the time. 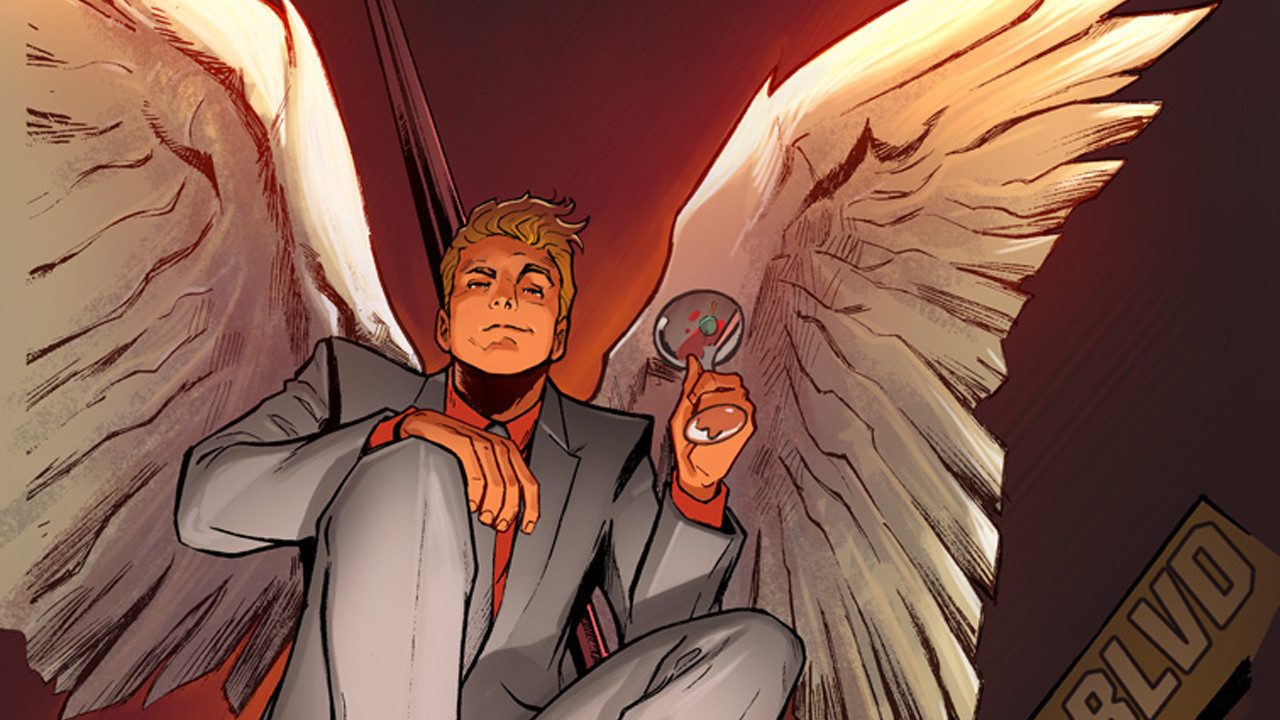 Fast forward to 2016, and we’re graced with a differing version, one that takes the concept of Lucifer leaving hell because he’s bored and slams it headfirst into a police procedural drama. And I have to say, it totally works. Gone is the otherworldly Bowie aesthetic (which is *kind* of a shame) and in is the high camp that Tom Ellis brings. Whether you enjoy this change or not will really depend on how much you like that style of acting, because Ellis effectively minces his way through the entire series with an infectious and almost pantomime-esque playfulness and I loved every second of it.

His take on Lucifer isn’t so two dimensional though, there’s a huge amount of pathos generated by his exploration of what it means to be human, and Ellis gets to display a full range with Lucifer as we see him experience loss, and potentially love, over the course of 13 episodes. It’s really a shame then, that they didn’t further incorporate this playfulness into every facet of his character; that they didn’t really use this as a lense to explore his sexuality seems a crime and a disservice to the character, as that really seems to be the most mundane element to the show. His charm is infectious to the point where people literally throw themselves at him, but a large plot point has been made by the fact that his devilish charms don’t work on his partner, Chloe Decker, and he spends a large portion of the show trying to bed her. All I’ll say of this, is that the creators could have afforded taking much more risk here, He’s the Devil…he’s supposed to be apart from humanity, so why would he play by our rules? Logically the Devil would be above having a preference right? In doing things this way it appears as though their target audience might be 40+ old women who thrive on a bit of titillation, as such this feels a tad dated in its approach, in fact, in this way, Lucifer himself feels very repressed in his desires. The very fact that they’ve limited him in this way shows a kind of creative fear that will ultimately limit the potential of this show, though if this is intentional, they could follow this and conduct a very meaningful exploration of the totality of what it means to be human, the vast and colourful array of experiences that comprise ‘Us’, instead of this homogenised version they seem to be portraying.

The character has the makings of a queer icon, so here’s a request on my part to the creators of the show, think less about scaring off a particular audience and being ‘safe’ and go out there with all guns blazing to secure lapsed True Blood fans (They need somewhere to go). Of course, it’s not every shows job to push the boundaries, but it is a great shame as this show has the perfect threads with which to weave a progressive yarn with. I’m aware that they don’t make television specifically for me, but that’s my two cents, and my only real criticism of the show; that a show in its first season play it safe should be denoted as it’s only crime really speaks volumes for how much I enjoyed myself here.

Distancing myself from this now, I have to mention that the show’s format is pretty standard for the Police procedural, there’s a case an episode with an overarching plot centered on Lucifer’s growing sense of humanity, and the perceived weakness it brings. He’s got daddy issues to boot, and his brother, Amenadiel, is trying to kill him. That’s really all there is in terms of plot points, and it’s really how we get to each one where the fun is had.  Ellis, as I’ve said previously, excels here, and his supporting cast do a perfectly good job of bouncing off of his zaniness. Lauren German is particularly pleasing as his partner Chloe, her humoring nature towards Lucifer affords the show increased moments for comedy, and though I really feel like the notion of her being his ‘prize’ for most of the show is a little dated and possibly offensive, they at least knowingly turn this on its head towards the latter half of the series, providing Lucifer with some growth, dispelling his infantile and underdeveloped view of the opposite sex. This of course, was all intended though, but I think it should have occurred earlier in the series and as such, they should push this element even further in season 2.

The idea of melding the supernatural with something as mundane as the police procedural is interesting, and it serves to elevate both worlds to new heights. Though I’ve seen it mentioned in other reviews that it is indeed a detractor to set inside a police procedural, I actually think this is one of the shows greatest strengths, as setting it purely in a supernatural setting risks the property becoming convoluted within its own mythology, and ending up losing its hold on character. In fact, in terms of melding the mundane with the supernatural, they’ve actually found a way to root “Lucifer” into a more grounded and believable frame of portrayal.

Overall, this is a steady, funny and strong start for a show, albeit a safe one. Tom Ellis is excellent here as is his supporting cast, but I urge showrunners to push the envelope going forward.

You can pick-up the entire first series of Lucifer now from all good retailers, including amazon!