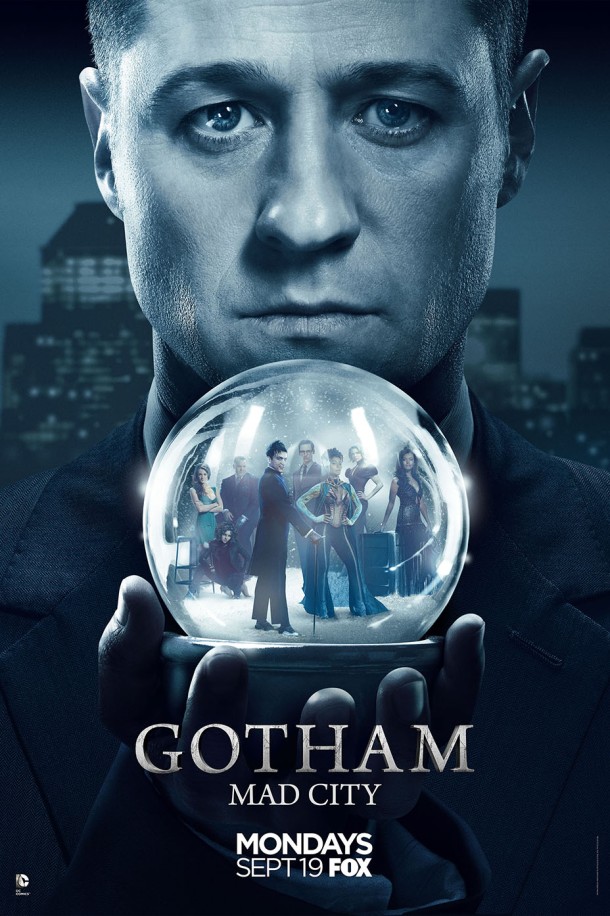 Released August 28th on Blu-ray/DVD and digital, Jim Gordon returns in Gotham Season 3; no longer a member of the GCPD, Jim still protects the streets of Gotham from escaped Arkham prisoners/Criminals/patients, in this exciting continuation of the Gotham mythos.

Set after a particularly eventful finale, capping off season 2 with Jim leaving the GCPD, season 3 picks up a few months after as we see him strike out on his own as a bounty hunter. It’s a little sad to see Jim start off the series at this point, considering the journey he’s taken to get here, though it only goes to highlight the shows insistence on complex morals and gives Jim some incredible moments with which to muddy the waters when it comes to his own internal compass. Indeed, Gotham seems to be based on one overused Nietzschean quote, as it see’s Jim’s strength of character constantly tested by Gotham and it’s criminal element. This is the crux of the show, and indeed the crux of where my interest lies with many of the shows cast, as it weaves its tale across 22 episodes and explores the increasingly fine line between being a hero or a villain; as Gotham shows, its usually a case of interpretation rather than fact.

It’s in this season that his positions is perhaps at it’s most malleable, and believe me, his circumstance changes a fair amount here. In fact, it’s fair to say, Jim’s arc is a bit of a rollercoaster this season, as it see’s him go from Bounty hunter (cleaning up the mess left over from the escaped convicts from the Indian Hill experiments) back to reluctant cop, on to undercover agent and for the most part this succession plays well. It’s no secret that Ben McKenzie’s complex portrayal of Jim’s struggle to do the right thing is a main draw for me, as yet again he proves himself a flawed but likeable protagonist, and in much broader praise, Gotham’s extra effort towards characterisation is it’s main USP when compared to other Genre TV.

It’s not all about Jim though, and his supporting cast continues to get an incredible amount of development, not to mention Mr. Cobblepot himself who ends up getting a revelatory arc concerning his growing romantic feelings towards The Riddler which is an off-center concept that feels completely natural when considering the two characters, and generates further sympathy for The Penguin, my other favourite character. All through this series, I found myself rooting for him; seeing his beginnings in season 1, developing in 2 and furthermore here, you really get a sense of what makes him tick, and the dangers of a troubled life can spell on a person that ultimately just wants the right to live.

The show is roughly split into three intersecting arcs, two main ones intersecting in the middle with a return from Jerome, which plays out as entertainingly as one would expect (he’s one of the best things about the last season too). Edward Nygma (The Riddler) continues to command attention and is as captivating a villain to watch as ever; the show really plays with its characters, avoiding the campness that is often associated with DC TV shows, yet you can still tell that the actors are having incredible fun. Keeping things dour here really serves to underpin the message of the show, which ultimately serves as an explanation as to why the choice to become Batman was so easy for Bruce. The budding relationship between Bruce and Selina is always nice to watch when in full knowledge of their future trist as Batman and Catwoman, and although moments between them (and to an extent, the larger subplots involving Bruce) only serve as an elaborate aside to constantly remind the viewer that this is indeed a Batman show, it’s still nice to bank on that nostalgia as we watch.

There’s a small worry here that Bruce’s arc will continue down a path that ultimately makes him a bit superfluous, as events that he has been a part of in the show often make his parents death feel like the first in a line of tragedies rather than the all encompassing moment that made him snap. This seems unavoidable though, to some degree, as the show progresses.

Ultimately I am pleased with the direction season 3 has taken. Throwing our characters into much weirder territory than previous arcs have dared, this series grew the show as a whole into a much larger world. Though it isn’t without the odd stumble, this can merely be attributed to growing pains and only goes to prove that the showrunners are unafraid of shaking things up when they need to.

Extras included on the Blu-Ray disc are “The Dark Within the Dark: The Court of Owls”, “Madness Rising: The New Villains of Gotham”, “Ben McKenzie Directorial Debut” and the obligatory “Gotham: 2016 Comic-Con Panel”.

Gotham – Season 3 is available now, and can be found on Amazon / iTunes.